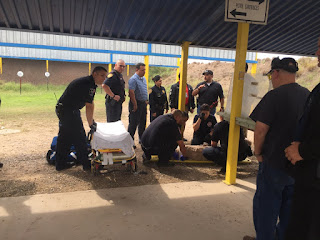 New Years Day, Bonnie and Jack were shooting steel in a competition at Pharr. While they were shooting one stage, Aaron Meza, a competitor we know, had an accidental discharge and shot himself in the leg. He is out of surgery, but has serious damage to his leg.
Please read Bonnie's comments below.
Sent from my Verizon, Samsung Galaxy smartphone

Each shoot starts out with the standard safety meeting. This is a review of the range procedures, a reminder of the 180o rule, trigger fingers and other safe gun handling.  Today we had several new steel shooters and the range safety officer (RSO) reviewed in more detail safe gun handling and range commands during a steel stage.

Shooting steel is fun!  Shooting steel requires high concentration which begins as the shooter steps into the shooting box. At the command, "load and make ready", the RSO carefully watches as the shooter un-holsters their pistol, inserts the magazine, loads a cartridge into the chamber, and returns the loaded gun into their holster.

Today, for Aaron Meza the next command, "shooter ready?" didn't happen.  For Aaron the unthinkable happened. As he returned his pistol back to the holster, his finger made the gun go BANG.  A fraction of a second made the difference from a safe holstering, to his finger touching the trigger and discharging the gun.  The bullet travelled through the holster, down his thigh, through his knee and lodged in his calf.

A negligent discharge can happen faster than a blink of an eye. It can happen to a competition shooter such as Aaron, trained in law enforcement. It happened with a RSO standing inches away.... it can happen to anyone, at anytime, it only takes a fraction of a second.

So far we have been lucky.

Today was a vivid reminder that all of us, when at our range (or, at any range for that matter), should be safer.

Our range is fortunate to have volunteers who care, who have undergone extensive training and are willing to stand at the firing line as RSO, making sure our range stays safe.

So, when you hear a correction, or have a conversation about keeping your finger off the trigger, a reminder of the 180o please don't take it personally.... take it as a friend talking to a friend.  Accept it and move on.

Today I was reminded how quickly an accident can happen, and WILL happen, even to the best.

For Aaron, 12 hours later he is out of surgery, it's a hell of a way to start the New Year.  So I ask, as a friend to a friend, let's all try harder, listen closer, and shoot safer this winter season.

Posted by RetamaRange at 9:13 PM

Are We Getting Popular?